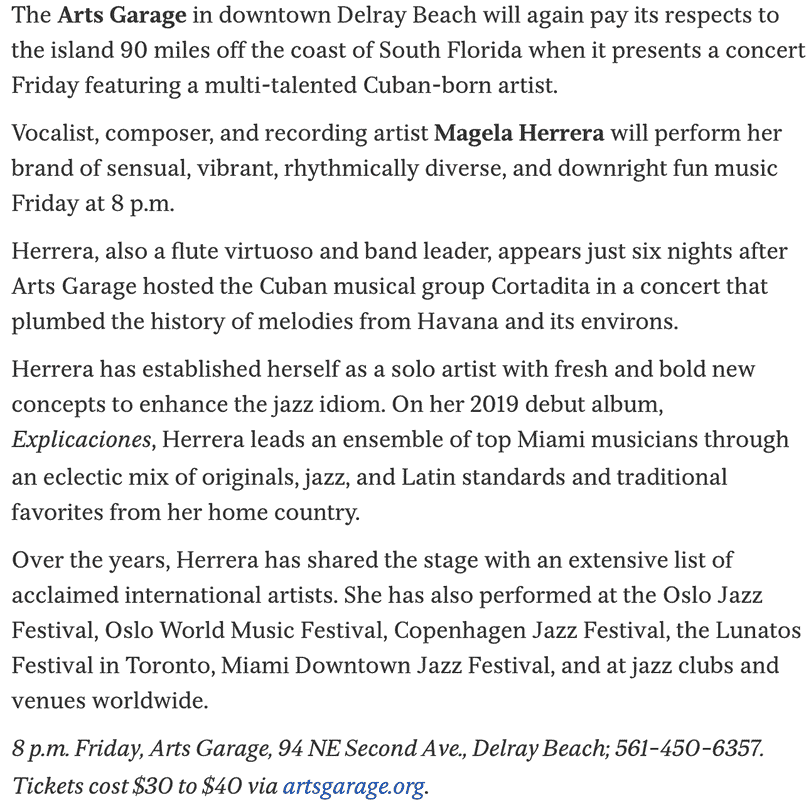 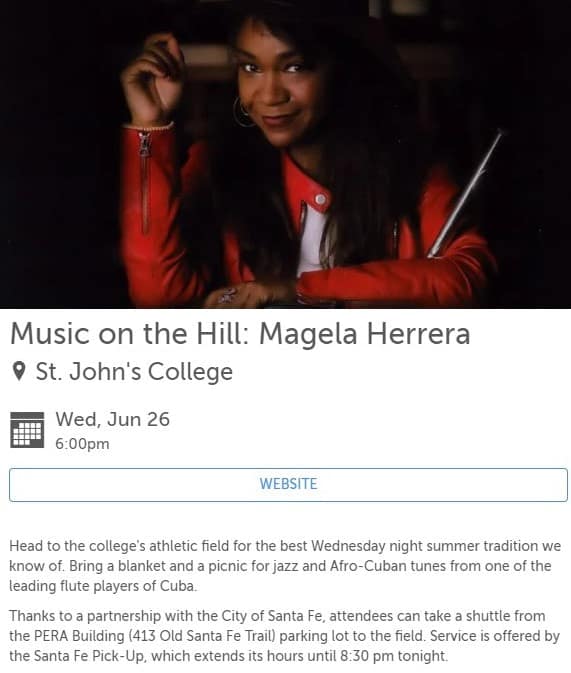 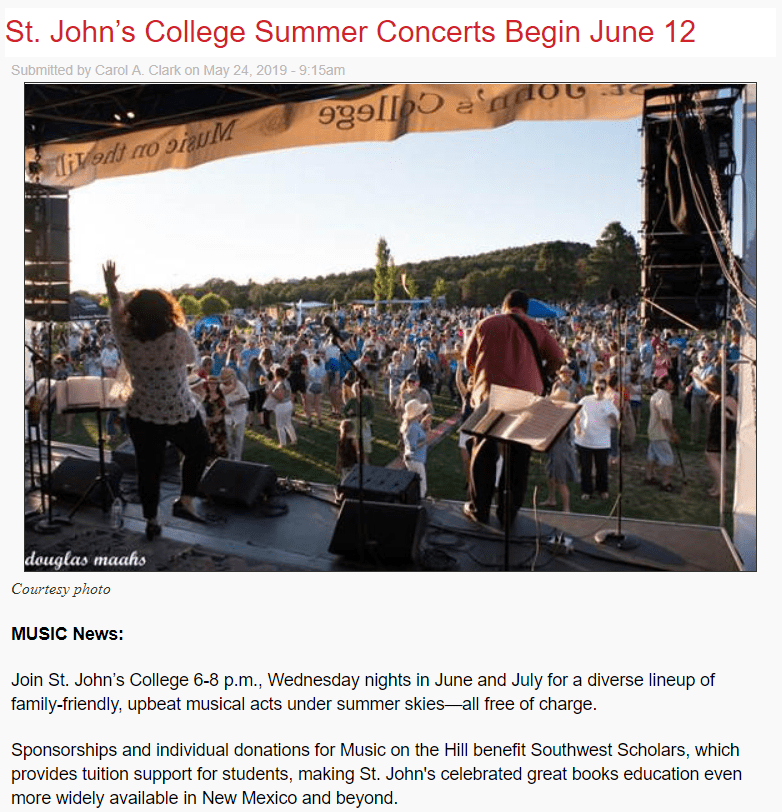 "St. John's College Summer Concerts Begin June 12" By Carol A. Clark
Flutist Magela Herrera is a leading light of Havana's jazz and popular music community. With influences that span Europe, West Africa, and her home country of Cuba, Magela has grown her musical skill set to include piano, vocals, and composing/arranging. In 2010, Jazz Corner magazine nominated her improvisation on Mezcla’s CD “I'll See You in Cuba” for best flute solo in Latin jazz.
May, 2019

"An example of uncommon talent who to date has only viewed the Grammys from a distance, Cuba-born, Florida-based flautist Magela Herrera proves on her debut album, Explicaciones (Brontosaurus Records), that her time in the Grammy spotlight can’t be too far off. Loaded with classical, pop, jazz and Latin influences, the young instrumentalist and composer will quickly charm even the most jaded listener. Working with an ensemble of Miami-based musicians, the session is a bold blend of rhythmic intensity and concert hall virtuosity. And, she sings, boasting a sexy voice and fluid, emotive style on a touching remake of “Bésame Mucho.” A standout take that displays the ensemble’s many talents is “Danzón Para Papá” – a frisky update on the stately Cuban rhythm. There’s much to relish in what Herrera and her crew deliver on this 8-track set."
May, 2019 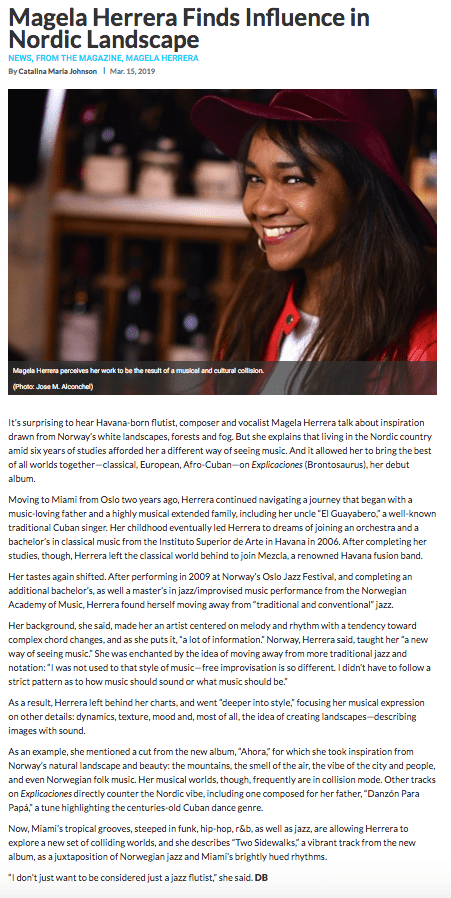 Downbeat Magazine describes how Magela's musical tastes were influenced by Norway, and how she has developed her craft over the years.
March, 2019 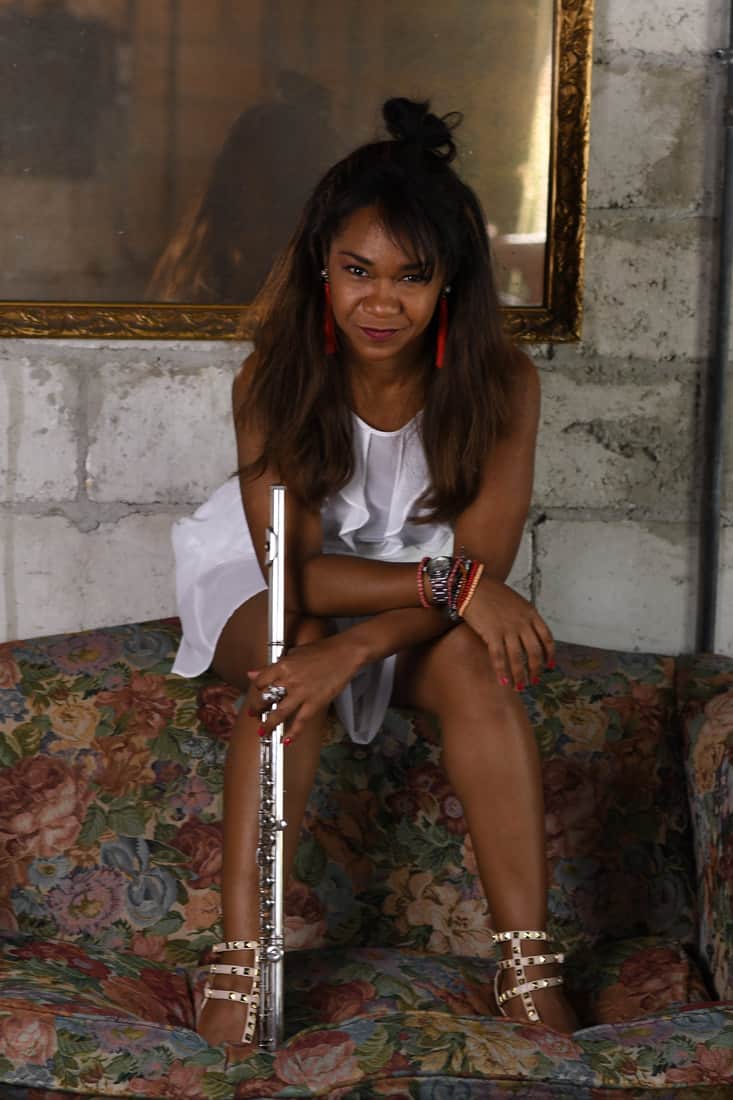 There are great instrumentalists who are adequate vocalists and terrific singers who can play a few notes, but it’s rare to find an artist who does both—play and sing—with virtuosity. Cuban-born flutist and vocalist, Magela Herrera, is one of these musical unicorns. In her debut album as a leading lady, Explicaciones, Herrera lets her versatile musicianship do all the necessary explanation.
​
When you listen to the album, you’ll notice that Herrera’s dual talents do not exist in isolation from each other; they profitably co-exist and inform one another. It’s because she sings so well that she’s able to phrase so nicely and cleanly on flute.

Similarly remarkable is Herrera’s ability to simultaneously blend mastery of traditional Cuban and Latin American forms with a penchant for decidedly contemporary arrangements, characterized in no small part by alternating and complex time signatures. For this, see, most notably, her fresh reconstruction of perhaps the most recorded of the traditional boleros, “Besame Mucho.”

Her treatment of the traditional Cuban danzón in “Danzón Para Papá” is similarly faithful yet innovative, with masterful piano playing by Tal Cohen that conjures the energetic and Latin-infused style of Bobby Enriquez. Herrera signs off with an R&B-infused take on “My One and Only Love,” capturing the inherent plaintive, almost desperate, yearning that you’ll find in the best renditions of the Guy Wood standard. We will miss Ms. Herrera until a next time that seems much too far away.
February, 2019 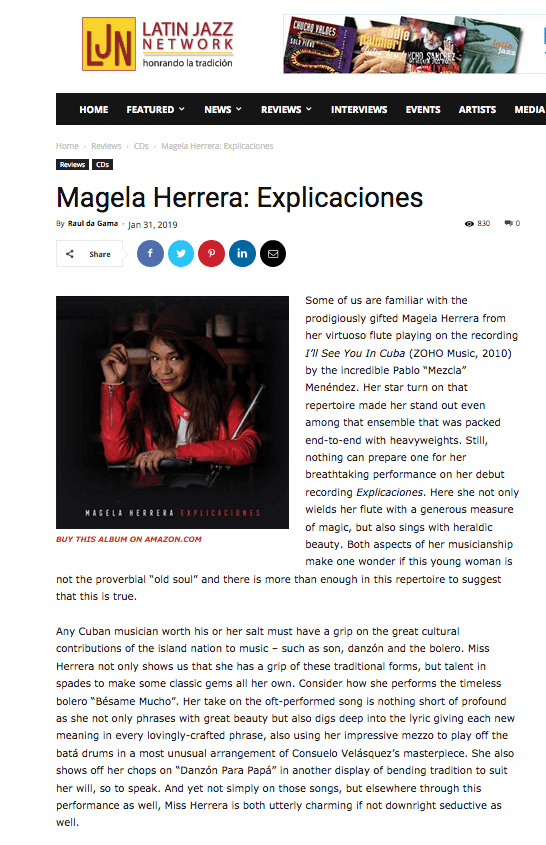 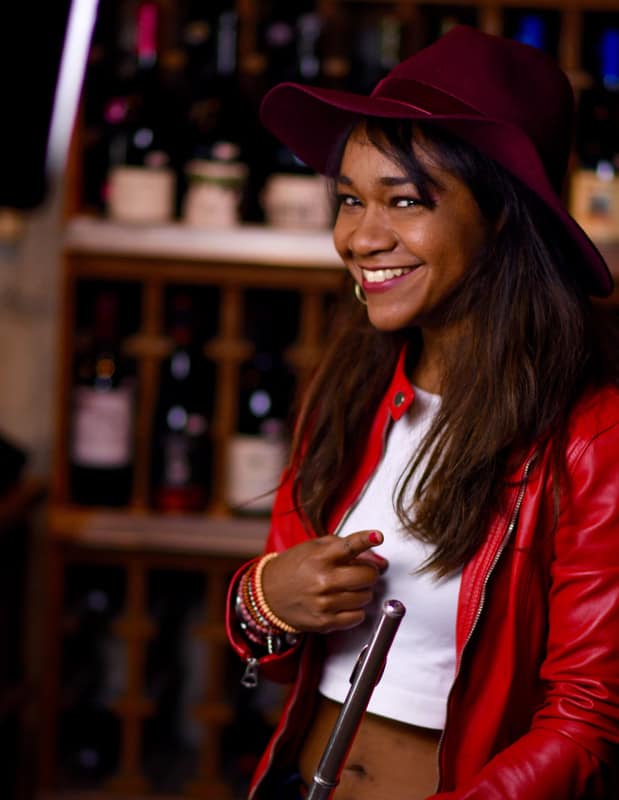 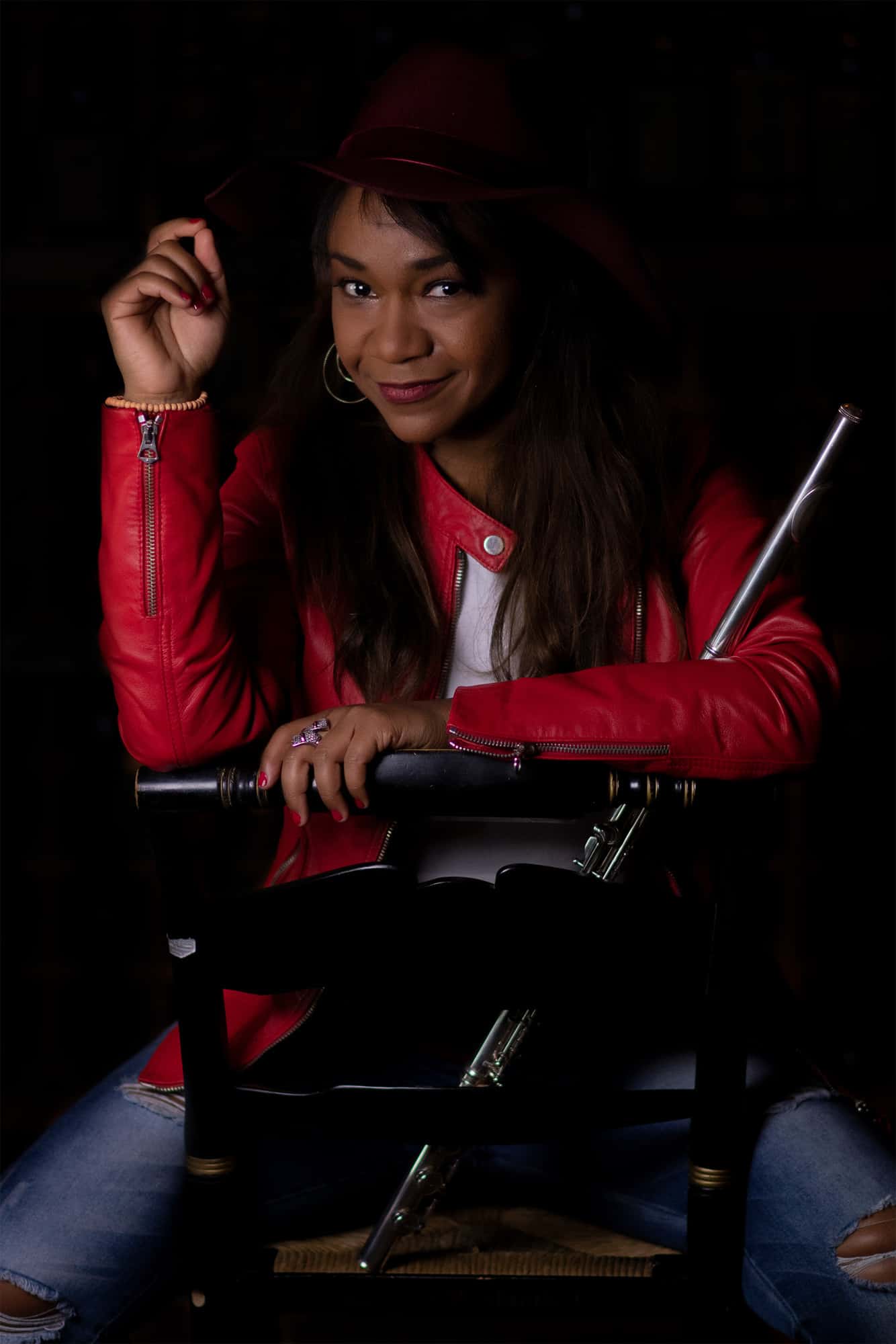 DECEMBER 28, 2018 "Magela Herrera stuns on debut album 'Explicaciones'" ​By Dodie Miller-Gould "Magela Herrera is a vocalist, composer and flute player. Born in Cuba, Herrera is based in Miami. After years of ensemble playing, Herrera presents a debut album full of fresh and stunning ideas. “Explicaciones” the new album from Herrera, is due for release Jan. 21, 2019. About Magela Herrera ​According to Herrera, music came to her during her earliest days. “My parents exposed me to all kinds of music and my mom told me that as a baby, I would wake up from my naps singing – -which is why they enrolled me in music school.” Herrera has come a long way from her days of singing after nap. The flutist didn’t want to limit herself to Cuban music and went to Norway to study music. There, she earned bachelor’s and master’s degrees in Jazz Performance from the Norwegian Academy of Music. This was after she had earned a bachelor’s degree in classical music from the Instituto Superior de Arte (ISA). She also studied classical music in her native Havana previously. Claiming to be too shy to have recorded an album before now, Herrera spent the last two years gigging in Miami’s vibrant jazz, r&b/funk and electronica scenes. Herrera is well-versed in playing flamenco, Latin music, Afro jazz and electronic music. Herrera is joined on the album by some of jazz’s most talented players. Tal Cohen is on piano, Greg Diamond is on guitar, David Chiverton is on drums, and Nestor Del Prado and Dion Keith Kerr play bass." About “Explicaciones” by Magela Herrera The debut album is full of eight expressive tracks. Each has its own identity and flair. Listeners will come to appreciate Herrera’s fluid, ethereal, and melodic flute playing. The rhythms are strong and persistent. “Two Sidewalks” opens the album and it is full of Herrera’s signature style. It opens with a swift rumble of bass. The flute darts in and out with quick notes. The drums clatter effectively. The piano then copies the lines of other instruments. The song gives the impression that small animals are chasing each other. That is the kind of music Herrera makes- – that which moves and inspires movement in others. The end of the song is a wild flurry of sound, until the flute plays its final measures and the album is whisked to another song. “Principios” and the title track, “Explicaciones,” are also standout tracks. On her debut album, Herrera sings and plays. Her version of jazz mixes smooth sounds with Latin rhythms, a fluttering flute motif with a gently thundering drum beat. The sounds are pleasant without being sleepy. They are innovative without going too far afield. “Explicaciones” will be available in stores and online.
January, 2019 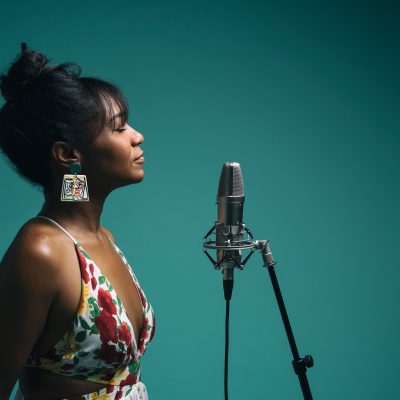